The modern picture book has come a long way. Not only has the medium and the format been explored, but the content has evolved to reflect the changing social consciousness. Ezra Jack Keats’s picture book, A Snowy Day came onto the scene at a time when  picture books needed a push forward to reflect the culture and social climate of the moment. Written in 1962, Keats’s work proved that racial diversity could be successful in mainstream publishing. Peter, the protagonist of the story, explores the snow that has fallen overnight in his city landscape, and carves his own pathway as he discovers its joys and fleeting qualities. This exploration of one’s environment is a timeless moment frozen during a shifting world that allowed the picture book to tell a beautiful story, but in a more honest depiction of the current world state.

America during the 1960s was rife with racial struggle. John F. Kennedy was President, the space race was heating up, war continued in Vietnam, and the idea of racial equality spread in a climate used to segregation and color distinctions. These interests were depicted most frequently through print and television. Media also focused heavily on young viewers during that time. However, the content depicted was most often white-centered. Any minority group was sparingly seen and at times heavily misrepresented. When African American characters were depicted, they were “most often represented as regressive and stereotypical—fools, clowns, servants, and dim-witted boys and girls meant to entertain white people and play to their prejudices” (Berger 31). While this representation was seen in various formats, Keats then had a rare opportunity to combat this image with his chosen form, the picture book. A visual representation that would be distributed among millions, the picture book “provides information about other lands and other peoples in a more palatable way than a textbook or even a National Geographic magazine. In addition, putting an emphasis on the artwork helps children learn that there are different ways of presenting information” (Hellman 6).

Picture books had an opportunity to be acquired by families that encompassed a wide range of ages and social classes. Therefore, it had the ability to influence the past but also future generation in a way that connected on a familiar level. While you could explore different cultures and countries at the turn of a page, you could also discover something new in your own backyard.

The cover art for The Snowy Day focuses on a small boy overlooking his footprints in the snow. As the first full-color picture book to feature an African American protagonist (Berger 30), Keats puts the issue front and center by placing Peter in a spot of importance. His character, inspired by a newspaper clipping of an African

American boy he saw in Life magazine, published on May 13, 1940, fits into a familiar city landscape that coincides with his own childhood in the streets of Brooklyn. Keats, a child of immigrant Polish parents, was raised in a predominantly Jewish area of East New York. Empathetic to children of different backgrounds and races, he was able to find a commonality amongst those experiencing hardships and racism that at times played out in his own personal experiences. The streets were his playground, the residents his friends, which were then interpreted and emphasized in his illustrations. For example, the colors are bright and vibrant, which contrasts with the heavy proportion of the white snow banks. Peter conquers the world around him, making his own mark, not allowing the environment, and by relation, his society, to keep him penned in. His suit of red is distinct, framing his face, full of life. Peter explores, he creates, and he discovers wonder. The city, although big and overpowering, does not keep Peter contained, but allows him to grow. Keats’ choice of material also lends itself to his choice of subject. He used a technique unfamiliar to his past picture making practice. His collaged papers from Japan, Italy, Sweden, and America, making the final images a “melting pot” of cultural reference (Keats 1). The clothing is made from canvas and oilcloth, and the textures are created with paint on gum erases, India ink, and the rough bristles of a toothbrush (1). The combination of technique shows that an image isn’t merely one idea or made by one method alone. Just as people are not one ideal, the world around us is comprised of many things.

Keats captures the American spirit in The Snowy Day and opens up the picture book market to an explosion of racial expression and a wider perspective. Illustrators may have felt more able express such bold racial statements. Norman Rockwell’s narrative on Ruby Bridge’s historic school attendance in The Problem We All Live With was painted in 1964, a few years after Keats’s Caldecott win. Of the Caldecott list prior to The Snowy Day, only three picture book winners featured a illustrated book, Ashanti to Zulu: African Traditions, a picture book that embraces the Saharan culture, also a Caldecott winner.  In this regards, The Snowy Day set the stage for a more realized world view. Keats’s book does two things well: one, it helped black children realize “being ‘colored’ is a normal, beautiful thing” (Berger 34), and two, “it turns their ‘hurts and resentments into emulation, ambition, and love of their home and companions’” (34). Peter goes on to make an appearance in six other titles. He grows up, his neighborhood changes, and he is still exploring. Keats made a conscious decision to change the landscape of picture books. His work made great strides, yet the field is still ready for more boundaries to be opened and explored.

Nahson, Claudia J., and Maurice Berger. The Snowy Day and the Art of Ezra Jack Keats.

Melissa Crowton is an award-winning illustrator and a graduate illustration student at the Maryland Institute College of Art (MICA) in Baltimore. A native of Utah, she has worked as a professional librarian, and her strong interest in children’s literature is reflected in her art and her writing. 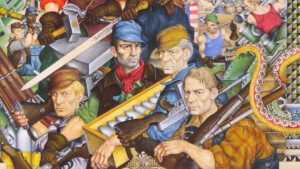